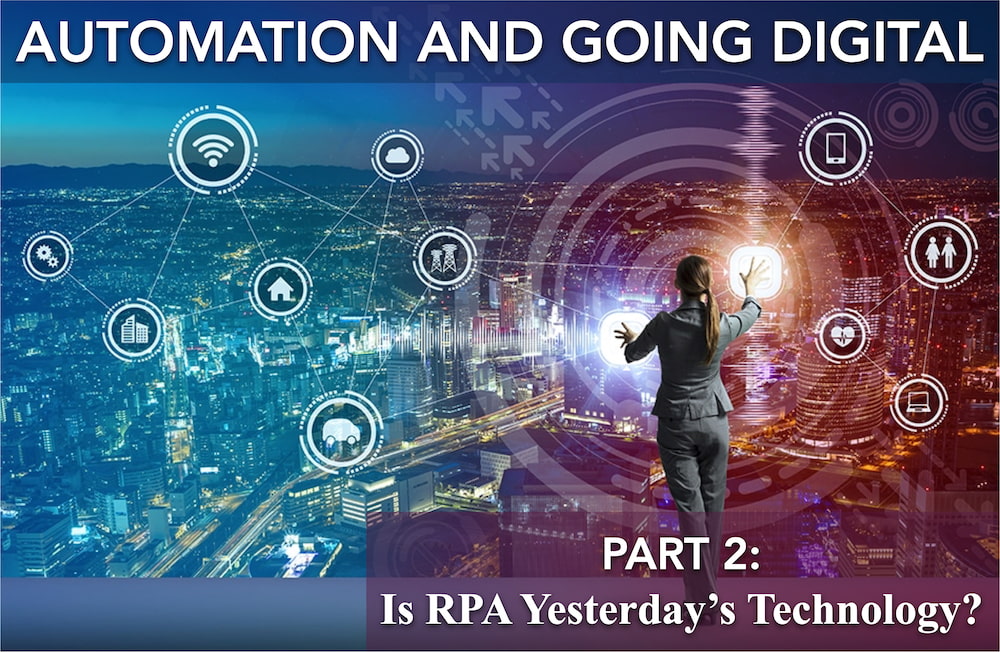 What is Robotic Process Automation, and what is its future role?

RPA is a fairly dumb piece of software that replaces a human in fairly simple, repetitive, information processing tasks. Modern organisations are absolutely full of such tasks so RPA has wide application. RPA software contains pre-configured rules, which processes structured input data to produce correct deterministic outcomes. If it cannot produce an answer it throws out an exception to be handled by a human. Essentially it’s an information processing execution engine. Unlike more advanced tools, it does not learn, it does not contain complex algorithms, it cannot deal with unstructured data, images, or natural language. However, it can work well in a complementary way with both advanced cognitive tools, and also humans, as part of a broader work processing system.

The RPA role historically has been to improve labour productivity by providing a quick, cheap solution that avoids the IT prioritisation queue and delays. RPA does not need specialist developers, it can be configured quickly, and business operations can run it within IT security, protocol and guidelines. Organisations have had a lot of problems moving this kind of use to the next stage, because they tend to treat RPA as a low level tool, despite the multiple benefits we have been seeing from its application. I will talk about that in a minute.

But the future that we write about in our latest book—Becoming Strategic With Robotic Process Automation—is already being progressed, we would say by twenty percent of organisations across sectors. And what we are seeing, firstly, is much greater scaling trying to apply RPA across the enterprise, and also to end-to-end processes. Some RPA products lend themselves to this more than others, because they reduce the technology integration, security and protocol problems that can arise.

Secondly, there is shift to using RPA together with cognitive automation tools—for example one might structure the data for use in RPA, and another might take the data from RPA and carry out predictive analytics with that data. The result—this sort of ecosystem of automation technologies is often called ‘intelligent automation’—it is certainly a more intelligent use of automation! Anyway one result is the creation of an enabling automation platform that can give a management a lot more choices, opportunities and faster innovation not just for internal operations, but also for external relationships with customers, for new services and products, and greater competitiveness. Our research shows that organisations are accelerating their moves in this direction, not least because there is a huge amount of value being left on the table—a further US$1 trillion annually in global banking alone, according to McKinsey. But too many organisations still have a tactical view of these automation technologies, while a lot still find the challenges difficult to surmount—more in a minute on that.

Thirdly, we are seeing the leader organisations see RPA and cognitive automation as part of much larger digital transformation efforts, moving much more work to the cloud, and combining automation technologies with other advanced digital technologies—we call them SMAC/BRAIDA so you will see increasing links in the future with social media, mobile, analytics, blockchain, robotics, Internet of Things, digital fabrication and augmented reality technologies.

What impacts can RPA have on companies?

At the start of our research, in 2014, there were few RPA users and we chose to look only at the most successful. What surprised us was the multiple benefits they were getting, many unplanned for, and completely unexpected. Organisations tend to go for a return on investment, and look to lower the cost of operations—they were getting ROI of anything between thirty percent and two hundred percent in the first 2 years, depending on the process. They were saving large amounts of time what became called the ‘hours back to the business’ metric, work was being done faster, cheaper, more accurately, 24x7, with strong audit trails. Then regulated industries like energy, and insurance and banking found they could get quicker regulatory compliance when regulators changed the rules thus avoiding large fines for non-compliance. One UK insurance company turned to automation after paying out a £8.4 million fine for non-compliance, for example.

Fundamentally, organisations were finding that more work could be done, with the same or less numbers of people. At the same time the customer service and experiences were being addressed and enhanced—queries, insurance policies processed, repayments processed more quickly, more customised treatment. Then employees were appreciating the improvements in their work loads and type of work they ere doing. Some are moved into working directly in the CofEs, and become specialists in automation.

But as more companies moved into RPA we found that this triple-win for shareholders, customers and employees was by no means the common experience. Some of it was to do with the limitations of the software—not everything called RPA is the same, and some vendor products are difficult to scale to enterprise level. But our second book on RPA and risk mitigation detailed some 41 material risks that emerged, and the many management actions that could be taken to get the triple-win. We learned these from the successful companies—I think we now have some 35 or more what we call Action Principles which we have published widely. I think a lot of managers are still working through how to deal with those risk but our latest work suggests that at the back of it they need a much more strategic vision to get the payoffs that we know are there—we have the evidence its all published—from applying these automation technologies.

Which companies are more likely to gain a lead with automation and digital?

We have been studying this for the last 6 years, and a clear picture has emerged.

The top attribute is that they have an executive team that believes that digital technologies can be transformational and of strategic importance to its business as whole. Actually the evidence is that it does have these characteristics. The more digitised businesses are the better financial results they get in their sectors. In fact getting ahead and being a leader in these technologies is likely to give the organisation a competitive advantage that becomes irreversible over a 5-7 year period.

Such an executive team will fund and resource the technology as a long term strategic investment to build a digital business platform that delivers necessary internal changes much faster, can support new product/service and can seize business opportunities as they arise.

In our book, Becoming Strategic With Robotic Process Automation, we detail all the strong attributes of a digital leader. Getting there we suggest involves:

Obviously I would argue from all this that RPA is far from being yesterday’s technology and is a fundamental part of the automation and digital platforms so many organisations are going to spend the next five years constructing. In this respect it is interesting to observe the very high valuations that are placed on RPA-based vendor companies when they go public—like Uipath in 2021—or are when they being purchased by much larger companies, as has occurred for example with Microsoft and IBM. Over time RPA will be absorbed into much larger technology platforms in which they will play important roles. Becoming less high profile—even invisible to media attention—will not mean diminished utility.